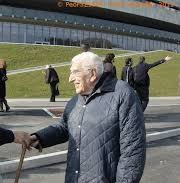 Valenzano started competing in hillclimbs in his own build single seater and received later a BMW-engined single seater designed by Enrico Nardi. He was soon noticed by Carlo Abarth, who hired him as works driver for Abarth. There he met Gianni Lancia, son of Vincenzo, with whom he went to the Liceo classico Massimo d’Azeglio as a child. Lancia let him try out an Aurelia B20 and Valenzano decided to compete in professional racing with that car and later the Lancia D20 and D24. He competed in Mille Miglia, Targa Florio and the 24 Hours of Le Mans. Among his teammates were successful drivers like Alberto Ascari, Luigi Villoresi, Juan Manuel Fangio and Luigi Musso. In 1955 Lancia withdrew as a team from professional racing, so Valenzano switched to Maserati and drove six more races. However, this would be his last season, because his brother Piero died during the Coppa d’ Oro delle Dolomiti on July 10, 1955.