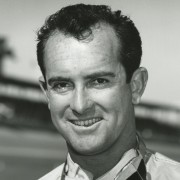 During his teens, Bondurant raced an Indian motorcycle on dirt ovals. In 1956 he switched to sports car racing with a Morgan and started to attract attention when he won the West Coast “B” production Championship, in a Chevrolet Corvette winning 18 out of 20 races.

Santa Barbara Chevrolet dealer Shelly Washburn hired Bondurant in 1961 to drive his #614 1959 Corvette. Some of the best Corvette racing duels were between him and David McDonald on the West Coast during the early 1960s. At the L.A. Times Grand Prix in October 1962, Bondurant drove Washburn’s new 1963 Corvette Z06 Sting Ray. Between 1961 and 1963, he won 30 out of 32 races in Washburn’s Corvettes.

In 1963 he became a member of Carroll Shelby’s Ford Cobra team, winning his first race at the Continental Divide Raceway in Colorado, followed by an overall win at the LA Times Grand Prix GT race at Riverside in October 1963. For the 1964 FIA season after finishing 2nd in GT at Sebring, Bob was in Europe racing the new 289 FIA Cobras at the Targa Florio, Spa and Nurburgring. His best-known victory was winning the GT class at Le Mans 24 Hours in 1964 in Shelby’s new Cobra Daytona Coupe with Dan Gurney co-driving. In 1965 Bondurant won the FIA Manufacturers’ World Championship for Shelby American and Ford, winning seven out of ten races against the class dominating Ferrari 250 GTOs in Europe. In the same year he drove a works Ferrari Formula 1 car during the United States Grand Prix at Watkins Glen, and handled a Lotus 33 for Reg Parnell at the following Mexican race.

For 1967 he drove in the CanAm series and in a Corvette L88 Coupe at Le Mans, and led the GT class until a wrist pin failed putting the car out in the early morning. Later that month while driving a McLaren, at Watkins Glen, the steering arm broke at 150 mph approaching the Loop-Chute section of Watkins Glen (the current Turn 5, but without the bus stop, which was installed in 1992). Bob sustained serious rib, leg, foot and, most seriously, back injuries in the subsequent accident in which his car flipped eight times. Doctors told him he would likely never walk again, but through courage and hard work he overcame his injuries.

While recuperating, Bondurant drafted an idea for a high performance driving school borrowing from the experiences he had while training James Garner for Grand Prix. The Bob Bondurant School of High Performance Driving opened in early 1968 at Orange County International Raceway then moved to Ontario and later moved to Sonoma, where he was an important figure in the track’s development. Nissan Motor Company (under Datsun in the US) was Bondurant’s sponsoring partner in his school from its beginning at and continued in that role at the Sonoma Raceway driving school.

Bob Bondurant had four NASCAR starts, all at Riverside International Raceway, with his highest finish of 18th in 1981.

Following the 1989 Loma Prieta earthquake he moved the driving school to Phoenix, Arizona, where he enjoys close ties to General Motors and Goodyear Tires.