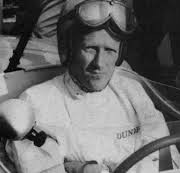 Henry Clifford Allison (8 February 1932 – 7 April 2005,) was a racing driver who participated in Formula One during seasons 1958 to 1961 for the Lotus, Scuderia Centro Sud, Ferrari and UDT Laystall teams. He was born and died in Brough, Westmorland (now Cumbria).

Cliff Allison started his racing career in a Formula Three Cooper 500 in 1953 before being spotted by Colin Chapman. Allison won the performance prize driving a 744cc Lotus in the 1957 24 Hours of Le Mans. The Lotus of Allison and Colin Chapman finished sixth in the 1958 12 Hours of Sebring endurance race for sports cars. Allison came in fourth with his Lotus in the 1958 Grand Prix of Europe at Spa-Francorchamps, more than four minutes behind victor Tony Brooks.

Allison and Dan Gurney shared one of three team Ferrari cars that competed in the June 1959 1000 km Nürburgring race. Seventy-five cars entered the 1000 kilometre race which was a world championship event for sports cars.

Allison was paired with Jean Behra in a Ferrari which finished second in the 1959 12 Hours of Sebring. The drivers received $1,500 in prize money. Allison was credited with the fastest lap of the Sebring race in the #9 Ferrari. He was clocked at 3 minutes 21.6 seconds on the 97th lap of the 5.2 mile course.

In May 1960 Allison skidded off the road during practice for the Targa Florio in Palermo, Sicily. His Ferrari reached a speed of 100 miles per hour when a tyre burst, or so the driver believed. The car crashed into a scrub forest, destroying itself and most of what it touched. When the mishap occurred the Ferrari was nearing the end of a five mile straight by the sea. This was the only very fast stretch of road in the event. Allison escaped from the wreck without a scratch, but his face was ashen and his mouth hung open with an expression of fear.

For the 1959 Monaco Grand Prix the Ferrari factory team fielded truncated versions of the cars they ran in future grand prix races. At Monte Carlo the Ferraris’ long sleek snouts (air scoops) were cut away to allow more air into the cooling systems. Wolfgang von Trips lost control of his Porsche in a bend where the street was steeply inclined to Casino. Allison’s Ferrari crashed into him as he spun. The Lotus of Bruce Halford came next into the blind curve and became part of the wreck. Allison and his Ferrari suffered the least damage while von Trips sustained a gashed face, and Halford had a cut to his arm. Neither of the three cars could continue.

He suffered a major crash behind the wheel of his Ferrari while practicing for the 1960 Monaco Grand Prix, and it took him almost the rest of the year to recover from his injuries. Allison was hurt when his Ferrari slammed into a straw barrier. He was unconscious when he was taken to a hospital. Allison sustained a broken left arm, rib fractures, facial cuts, and a concussion. He was listed in serious condition.

The following year he suffered another crash at the wheel of his Lotus at the 1961 Belgian Grand Prix. He broke both his knees and fractured his pelvis when his car careened off the course and overturned in a field.