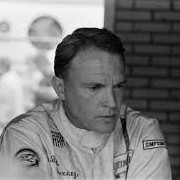 The son of a Metropolitan Opera star, he was born in Port Jefferson, New York, but moved to California as a teenager. He has been a driver, a car manufacturer, and a team owner at racing’s highest levels since 1958.

Gurney also won races in the Indy Car, NASCAR, Can-Am, and Trans-Am Series. Gurney was the first driver to win races in Sports Cars (1958), Formula One (1962), NASCAR (1963), and Indy Car (1967) (the other two being Mario Andretti and Juan Pablo Montoya). In 1967, after winning the 24 hours of Le Mans together with A.J. Foyt, he spontaneously sprayed champagne while celebrating on the podium. Apart from starting this tradition, he also was the first to put a simple right-angle extension on the upper trailing edge of the rear wing. This device, called a Gurney flap, increases downforce and, if well designed, imposes only a relatively small increase in aerodynamic drag. At the 1968 German Grand Prix he became the first driver ever to use a full face helmet in Grand Prix racing.

Gurney’s first major break occurred in the fall of 1957, when he was invited to test Frank Arciero’s Arciero Special. It was powered by a 4.2-litre reworked Maserati engine with Ferrari running gear, and a Sports Car Engineering Mistral body. This ill-handling brute of a car was very fast, but even top drivers like Carroll Shelby and Ken Miles had found it difficult to handle. He finished second in the inaugural Riverside Grand Prix (behind Shelby), beating established stars like Masten Gregory, Walt Hansgen and Phil Hill. This attracted the attention of famed Ferrari North American importer Luigi Chinetti, who arranged for a factory ride for the young driver at Le Mans in 1958. Gurney, teamed with fellow Californian Bruce Kessler, had worked the car up to fifth overall and handed over to Kessler, who was then caught up in an accident. This performance, and others, earned him a test run in a works Ferrari, and his Formula One career began with the team in 1959. In just four races that first year, he earned two podium finishes,