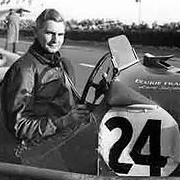 David Alan Hampshire (29 December 1917 – 25 August 1990) was a racing driver from England. He was born in Mickleover, Derby, Derbyshire and died in Newton Solney, in South Derbyshire.

David Hampshire first appeared amongst the likes of Bira, Villoresi, Tony Rolt, Raymond Mays, Peter Whitehead, Lesley Brooke and Reg Parnell in the 1939 Nuffield Trophy at Donington Park. However, the Maserati 6CL which he was driving, formerly owned by Arthur Dobson and re-engineered into an 1100cc car, only managed a few laps, retiring with a melted piston. The car was subsequently returned to 1500cc format. He raced the 6CL again at the 1939 Brooklands Whit Monday meeting and the Sydenham Trophy at Crystal Palace on 20 May (televised by the BBC). It had a final outing at Donington Park on 12 August 1939 just before the outbreak of World War 2.

After the Second World War,there were virtually no circuits in England to begin with so Sprints were undertaken at Gransden Lodge and Shelsley Walsh. Later in 1946 he competed in his Delage 158L (a 1927 GP car) in the Albi Grand Prix and the Grand Prix des Nations in which he finished 8th.

In 1947 he first drove Reg Parnell’s “The Challenger” in the British Empire Trophy and Reg’s ERA E type (GP1) at Lausanne both ending in retirements.

On the whole,1948 was more fruitful: he finished second in his Delage 158L in the 1948 British Empire Trophy at Douglas, Isle of Man, and seventh in the Zandvoort Grand Prix in the Netherlands. He also competed in that year’s Jersey Road Race.

In 1949 with the newly acquired (but 10yrs old) ERA R12b he was fourth in the British Grand Prix at Silverstone and also fourth at the Goodwood Trophy race. There were top ten results in the Jersey Road Race and the British Empire Trophy, an 11th position at the International Trophy Meeting, but retirements at the Albi and Lausanne GPs.

He competed in the 1951 24 Hours of Le Mans race in a works Aston Martin DB2 where, along with his friend, Reg Parnell, he finished third in class and seventh overall.