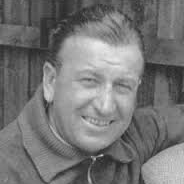 A native of Pesaro (Marche), he won the 1939 500cc European Championship on a Gilera. He participated in one Formula One World Championship Grand Prix on September 3, 1950, where he finished second and scored 3 championship points, his points being halved as he shared the drive with Alberto Ascari. Serafini still holds the record for highest percentage of podium places per race, 1 podium in 1 race gives him a 100% score. He also competed in several non-Championship Formula One races.