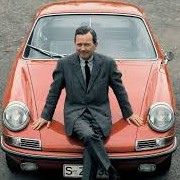 Ferdinand Anton Ernst Porsche (19 September 1909 – 27 March 1998), mainly known as Ferry Porsche, was an Austrian technical automobile designer and automaker-entrepreneur. He operated Porsche AG in Stuttgart, Germany. His father, Ferdinand Porsche, Sr. was also a renowned automobile engineer and founder of Volkswagen and Porsche. His nephew, Dr. Ferdinand Piëch, is the longtime chairman of Volkswagen Group, and his son, Ferdinand Alexander Porsche, was involved in the design of the 911.

Ferry Porsche’s life was intimately connected with that of his father, Ferdinand Porsche, Sr., who began sharing his knowledge of mechanical engineering already in his childhood. With his father he opened a bureau of automobile design, in Stuttgart in 1931.

They worked together to fulfill their country’s National Socialist regime’s needs and they met Adolf Hitler at many business events. The Volkswagen Beetle was designed by Ferdinand Porsche, Sr. and a team of engineers, including Ferry Porsche.

After World War II, while his father remained imprisoned in France, being accused of war crimes, Ferry Porsche ran their company. Aided by the postwar Volkswagen enterprise, he created the first cars that were uniquely associated with the company. Despite the political-economical adversities of the postwar years, the company manufactured automobiles and, eventually, became a world powerhouse for producing sports cars.