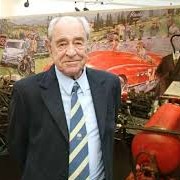 Gianni Marzotto (13 April 1928 – 14 July 2012) was an Italian racing driver and entrepreneur. The son of Count Gaetano Marzotto, he entered his first race in the Giro di Sicilia and finished second in class. His first major success occurred during the 1950 Mille Miglia driving a Ferrari. Marzotto repeated this success in 1953 in the record a time of 10 hours and 37 minutes. After retiring from Motor Racing, Marzotto joined the Factory Lane G. Marzotto & F. Spa to become a director in 1953 before being promoted to Managing Director in 1956. In 1958, he gained a further promotion to vice-president and managing director before becoming the company president in 1968. He married in 1969 and had three daughters.