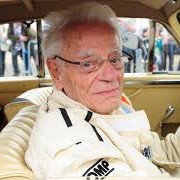 Hermano João “Nano” da Silva Ramos (born 7 December 1925 in Paris, France) is a former racing driver of dual French-Brazilian nationality. He had a French mother and a Brazilian father.

Da Silva Ramos first ventured into motor racing, driving an MG TC, in March 1947, when at the age of 21, he competed in the Interlagos Grand Prix in Brazil. During 1953 he began racing an Aston Martin DB2/4 in sports car races in France. In 1954 at Montlhéry, he crossed the line in second place in the Paris Cup. In the same year, he also participated in the Le Mans 24 hour race, with Jean-Paul Colas as his co-driver, being forced to retire after 14 hours following a transmission failure. Later in the year in the Salon Cup, in which he also had to retire, he drove a Gordini Type 18.