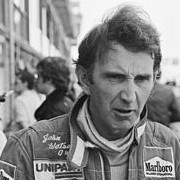 John Marshall Watson, MBE (born 4 May 1946) is a British former racing driver from Northern Ireland. He competed in Formula One, winning five Grands Prix and also in the World Sportscar Championship. He currently works for Sky Sports.

John Watson was born in Belfast. Educated in Rockport School, Northern Ireland, Watson’s Formula One career began in 1972, driving a customer March-Cosworth 721 for Goldie Hexagon Racing in a non-Championship event: the World Championship Victory Race at Brands Hatch. Watson’s first World Championship events came in the 1973 season, in which he raced in the British Grand Prix, in a customer Brabham-Ford BT37, and the US Grand Prix, where he drove the third works Brabham BT42. Neither was particularly successful, as in the British race he ran out of fuel on the 36th lap and his engine failed after only seven laps in the United States event.

Watson scored his first championship point in Monte Carlo the following year, for Goldie Hexagon Racing. He went on to score a total of six points that season, driving a customer Brabham BT42-Ford modified by the team. He failed to score points the following year, driving for Team Surtees, Team Lotus and Penske Cars. At the Spanish Grand Prix he had the chance to score his first win. He was in 2nd position behind Mario Andretti until he had a problem with his car because it suffered vibrations and had to enter the pit lane (Andretti retired later on). He still finished 8th which was his best result in 1975.