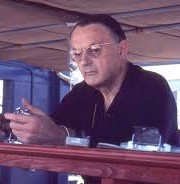 As team manager and team owner, Wyer won the 24 Hours of Le Mans several times. His first victory came in the 1959 edition, in his tenth anniversary as Aston Martin team manager, along with Roy Salvadori and Carroll Shelby, win with the DBR1. The team made their base for Le Mans at the Hotel De France from 1953 – 1975. The race cars would be tended within the courtyard and garage adjacent to the hotel before being driven to and from the circuit on the road for practice, qualifying and the race.

In 1963 he left Aston Martin for Ford Advanced Vehicles (FAV) In 1964. After dismal results with the GT40’s in their first two years, mainly dealing with reliability due to mechanical failure, the Ford GT40 program was handed over to Holman Moody and Carroll Shelby to compete against Ferrari, with the 1966 24 Hours of Le Mans victory being the most famous, as well as 1967. While factory support from Ford backed Carroll Shelby and Holman moody with the Mk.II and Mk.IV chassis, John Wyer continued competing with The GT40 Mk.I, as well as experimenting with their own in-house built cars, known as Mirage M1, M2, and M3.

When Ford closed the project after the 1967 season, John Wyer and John Willment formed J.W. Automotive Engineering Ltd (JWA). As Wyer was the well known team manager and present at race tracks, it was widely assumed that JW stands for John Wyer even though it means John Willment, as stated by Willment’s brother-in-law Hans Herrmann.

With backing from Gulf Oil and their team manager J-O Bockman, Wyer created the Ford-powered Mirage M-1, a prototype that won the 1967 1000 km Spa. Due to a rule change that came in effect for 1968, prototypes were limited to 3000cc, while sportscars could have 5000cc if at least 50 were built. This applied to the two-year-old Ford GT40s, which were modified by Wyer. As a surprise, Wyer won the World Sportscar Championship for Ford in 1968 even though the 2200cc Porsche 907 were considered favorites at the beginning of the season. The superior power of the 5000cc V8 allowed them to win on fast tracks, and especially at Le Mans two years in a row in 1968 (Pedro Rodríguez and Lucien Bianchi) and 1969 (Jacky Ickx and Jackie Oliver), even though they were outclassed at twistier tracks.

As it was obvious that the GT40 would finally become obsolete after 1969, Wyer switched to the new Porsche 917. Wyers’ team even became the factory’s main partner and was a major factor in developing the wedge-shaped Kurzheck tail of the 1970 917K which made the car much more stable than the original 1969 version.

Battling with the works Ferrari 512’s and the other Porsche team, backed by Martini Racing and led by Vic Elford, the JWA Gulf-Porsche 917’s, raced by Derek Bell, Jo Siffert, Richard Atwood and Pedro Rodríguez, earned many victories in 1970 and 1971, including the Spa 1000 km, but not at Le Mans. In fiction, a Gulf-Porsche 917K won in the cult movie Le Mans, making the Gulf colors even more famous.

In 1972, 5 litre sports cars like the 917s were banned, and the 3000cc Porsche 908 prototypes were also dropped by the factory as the new weight limit was too high, removing the 908’s advantage that balanced their lack of power.

Wyer adopted the new 3.0 L regulations and started building Gulf-Mirage prototypes once more, using a Formula One Cosworth DFV engine. The successful F1-engine was considered unsuited for endurance racing as vibrations took their toll after several hours, so modifications had to be made. After three years of trying, Jacky Ickx and Derek Bell finally achieved Wyers’ last win at Le Mans, in 1975.