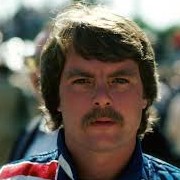 Keijo Erik “Keke” Rosberg; born 6 December 1948) is a Finnish former racing driver and winner of the 1982 Formula One World Championship. He was the first Finnish driver to compete regularly in the series. Rosberg grew up in Oulu and Iisalmi, Finland. He is the father of current Mercedes AMG Petronas Formula One Team driver Nico Rosberg.

Rosberg had a relatively late start to his F1 career, debuting at the age of 29 after stints in Formula Vee, Formula Atlantic and its antipodean counterpart Formula Pacific and Formula Two, then “feeder” series to Formula One. His first Formula One drive was with the Theodore team during the 1978 season. He immediately caught the attention of the Formula One paddock with a superb drive in the non-Championship BRDC International Trophy at Silverstone in just his second race with the team, emerging victorious after many of the big names had been caught out by a tremendous downpour. Rosberg wasn’t able to qualify for a race afterwards, and was signed by another uncompetitive team, ATS, for three races after the Theodore team scrapped its unreliable car design. He returned to Theodore after they acquired chassis from the Wolf Formula One team, but these were also uncompetitive and Rosberg returned to ATS to end the season.

He next emerged with the Wolf team, midway through the 1979 season. However, the team was having difficulty staying solvent, and Rosberg had problems in finishing races. Rosberg soon had to change teams again when Wolf left Formula One, and signed with Fittipaldi Automotive which had bought the remains of Walter Wolf’s squad. He secured his first two point-scoring results in the 1980 season, including a podium, but often failed to finish or qualify. 1981 was worse as he failed to score at all.