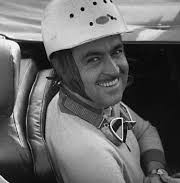 Maurice Bienvenu Jean Paul Trintignant (30 October 1917, Sainte-Cécile-les-Vignes, Vaucluse – 13 February 2005, Nîmes) was a motor racing driver and vintner from France. He competed in the Formula One World Championship for fourteen years, between 1950 and 1964, one of the longest careers in the early years of Formula One. During this time he also competed in sports car racing, including winning the 1954 24 Hours of Le Mans race. Following his retirement from the track Trintignant concentrated on the wine trade.

He began racing in 1938, and won the 1939 Grand Prix des Frontières, but his career was interrupted by the Second World War, during which his own Bugatti was stored in a barn. When he rebuilt it for an event of 1945, the Coupé de la Liberation, he overlooked a clogged fuel filter, which caused him to drop out of the race. It transpired that the filter was plugged with rat droppings, earning him the unenviable nickname Le Petoulet, “the rat-droppings man”.

By 1950 Le Petoulet was successful enough to be offered a works drive for the Gordini team, in the newly formed Formula One World Championship racing series. He competed in Formula One every year until his retirement after the 1964 season. During this long career Trintignant scored two victories, both at the Monaco Grand Prix, in 1955 and 1958. 1954 and 1955 were his best Championship years and he finished fourth in the drivers championship in both.

During the course of his career, Trintignant drove a huge variety of cars, for many different teams: both works and privateer. Unusually, at the 1955 Argentine Grand Prix Trintignant shared both second and third places, a product of the Scuderia Ferrari policy of passing cars to their top drivers, should their original car break down. In 1956 he drove the Bugatti Type 251 in the French Grand Prix, becoming the last driver to represent the famed marque at a Grand Prix race. Even in his final season, driving his own BRM P57, he scored points, taking fifth place at the 1964 German Grand Prix on the intimidating Nürburgring.

Following his retirement from racing, Maurice Trintignant returned to a quiet life as a wine-grower (naming his vintage Le Petoulet), near the town of Vergèze, in the Languedoc-Roussillon wine growing region, where he would eventually be elected mayor. Trintignant died, aged 87, in 2005.