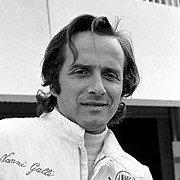 Giovanni Giuseppe Gilberto “Nanni” Galli (born 2 October 1940 in Bologna) is an Italian former saloon, sports-car and Formula One driver of the 1960s and 1970s.

He moved briefly into Formula One in 1970, debuting in the 1970 Italian Grand Prix with a McLaren-Alfa, and had a handful of drives over the next couple of years, finishing 3rd in the non-championship Grand Prix of the Italian Republic at Vallelunga in 1972 for the small Tecno team.

His one shot at the big time came that year when he drove for Ferrari in the 1972 French Grand Prix at Circuit Charade near Clermont-Ferrand but he made no impression, finishing only 13th. After half a dozen outings for Frank Williams the following year, he announced his retirement.