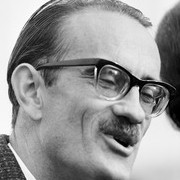 He took part in many 24 Hours of Le Mans in the 1950s, as well as in races at Mille Miglia, Montlhery, Monza and Nürburgring, often with a Porsche 550, the type of car he became famous for, when crashing over the banking of the AVUS in Berlin. The Porsche slid over the top and Frankenberg was thrown out, which was caught on photos like this one. He survived with minor injuries – unlike Jean Behra who was killed in a similar accident in 1959.

Frankenberg was killed in a roadway accident in 1973 at age 51.