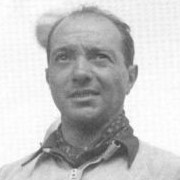 Robert Manzon (12 April 1917 – 19 January 2015) was a French racing driver. He participated in 29 Formula One World Championship Grands Prix, debuting on 21 May 1950. He achieved two podiums, and scored a total of 16 championship points. At the time of his death, Manzon was the last surviving driver to have taken part in the first season of Formula One in 1950.

Manzon began his career as a mechanic and after World War II he started racing, initially with a Cisitalia D46. Earning a contract with the Gordini team for 1948, Manzon took third place in the 1948 Grand Prix de Geneva and won some minor races although his machinery was not always reliable.

He continued with Gordini into the new Formula One era, scoring points at the 1950 French Grand Prix, and finishing sixth in the World Drivers’ Championship in 1952, taking third place in the 1952 Belgian Grand Prix. He left Gordini in 1953 and joined Louis Rosier’s team, which was campaigning Ferraris. He subsequently achieved his second podium at the 1954 French Grand Prix at the wheel of a Ferrari 625.

Manzon then returned to the Gordini team, but found little success in World Championship events. Outside the Championship, he won the 1956 Naples Grand Prix and a sports car race at Pescara.