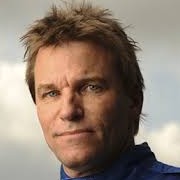 Stefan Nils Edwin Johansson (born 8 September 1956 in Växjö, Sweden) is a Swedish racing driver, who drove in Formula One for both Ferrari and McLaren, among other teams. Since leaving Formula One he has raced in a number of categories, including CART, various kinds of Sports car racing, and Grand Prix Masters. He is also the manager of New Zealander Scott Dixon, winner of the 2008 Indianapolis 500.

Johansson’s route to Formula One was via the British Formula 3 Championship, which he won in 1980 driving for future McLaren team boss Ron Dennis’ Project Four team. In Formula One he participated in 103 grands prix, debuting on 13 January 1980 for the Shadow Racing Team at the 1980 Argentine Grand Prix when he was still a Formula Three regular. He failed to qualify for the race and the next race in Brazil and he was not seen in Formula One again until 1983 after spending 1982 in the European Formula Two Championship with Spirit Racing where he finished eighth overall, his best finish being third at Mugello in Italy.