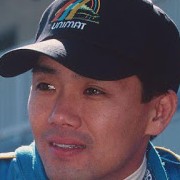 Inoue was born in Kobe. He competed in the British Formula Ford Championship in 1988, followed by a spell in All-Japan Formula Three from 1989 to 1993 and a season in the International Formula 3000 championship in 1994.

Inoue’s damaged car is towed back to the pits after his bizarre practice accident at the 1995 Monaco Grand Prix.
He participated in 18 Formula One Grand Prix races, making his first appearance on 6 November 1994 at the Japanese Grand Prix for Simtek. He scored no championship points, was considered a pay driver, and is perhaps best remembered for two bizarre incidents while driving for Footwork in 1995. The first occurred after a practice session at Monaco, when his stalled car was being towed back to the pits when it was hit by a course car, driven by Jean Ragnotti, causing it to roll into the barriers, although Inoue was fit to race the next day. The second happened in Hungary on live TV worldwide – attempting to assist the marshals in putting out the engine fire which had forced him out of the race, a vehicle driven to the scene by a marshal hit him, injuring his leg, although he recovered for the next race.

Inoue driving for Footwork at the 1995 British Grand Prix.
For most of the season his team-mate was Gianni Morbidelli, but late in the season Max Papis replaced Morbidelli, and was sometimes outpaced by Inoue.

Entering the 1996 season, Inoue lobbied Tyrrell for a drive, but the team chose Ukyo Katayama with his Mild Seven sponsorship money from Japan Tobacco. Instead, he was announced in January to drive for the Minardi team. However, one of his personal sponsors pulled out at the last minute and Inoue withdrew from F1. Minardi took on Giancarlo Fisichella instead. Fisichella, the team’s test driver in 1995, had backing from Marlboro Italy.

With his sponsorship reduced, Inoue was out of a drive in Formula One. After a brief switch to sportscars, he retired from racing at the end of 1999 and now manages drivers in his own country.