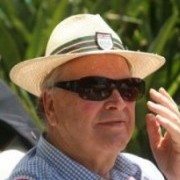 Reginald Harold Haslam “Tim” Parnell (born 25 June 1932 in Derby) is a British former racing driver from England. He participated in four Formula One World Championship Grands Prix, debuting on 18 July 1959, and qualified for two of them. He scored no championship points. His only finish was tenth place in the 1961 Italian Grand Prix at Monza. Tim Parnell managed the BRM Formula One team from 1970–74, and is the son of Reg Parnell, another racing driver and team boss. After his father’s death in 1964, he took on the running of Reg Parnell Racing and on occasion managed his own team with entries for Mike Spence and Pedro Rodriguez.