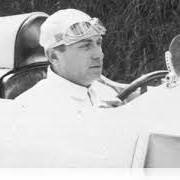 DIED
22 / 12 / 1969
Accomplished racing driver who came out of retirement briefly in 1934 to act as a reserve driver for the works Auto Union team.

Started competing in hillclimbs in the early 1920s. Nicknamed Bubi (the kid) by his fellow racers he then raced a number of different cars before retiring in 1929. In 1934 he came out of retirement briefly to act as a reserve driver for the works Auto Union team. He came third at Avus on the debut of the new car and later came second in the Swiss Grand Prix. He retired for good at the end of the year.