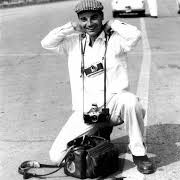 Cahier began photographing F1 in 1952 and in 1968 he was one of the founders of the International Racing Press Association (IRPA) which began the process of organising the media in F1. After the conflict with the FIA and FOCA, he remained close to F1 by running the Cahier Archive, one of the sport’s most complete archives.