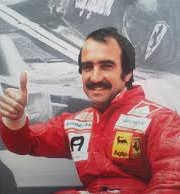 Gianclaudio Giuseppe “Clay” Regazzoni (5 September 1939 – 15 December 2006) was a Swiss racing car driver. He competed in Formula One races from 1970 to 1980, winning five Grands Prix. His first win was the Italian Grand Prix at Monza in his debut season, driving for Ferrari. He remained with the Italian team until 1972. After a single season with BRM, Regazzoni returned to Ferrari for a further three years, 1974 to 1976. After finally leaving Ferrari at the end of 1976, Regazzoni joined the Ensign and Shadow teams, before moving to Williams in 1979, where he took the British team’s first ever Grand Prix victory, the 1979 British Grand Prix at Silverstone.

He was replaced by Carlos Reutemann at Williams for 1980 and moved back to Ensign. Following an accident at the 1980 United States Grand Prix West he was left paralyzed from the waist down, ending his career in Formula One. Regazzoni did not stop racing, however; he competed in the Paris-Dakar rally and Sebring 12 hours using a hand controlled car during the late 1980s and early 1990s. In 1996, Regazzoni became a commentator for Italian TV.