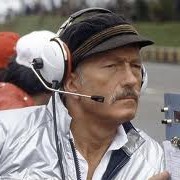 Anthony Colin Bruce Chapman CBE (19 May 1928 – 16 December 1982) was an influential English design engineer, inventor, and builder in the automotive industry, and founder of Lotus Cars.

He studied structural engineering at University College London, joined the University of London Air Squadron and learned to fly. Chapman left UCL without a degree in 1948, resitting his final Mathematics paper in 1949[2] and obtaining his degree a year late. He briefly joined the Royal Air Force in 1948, being offered a permanent commission but turning this down in favour of a swift return to civilian life. After a couple of false starts Chapman joined the British Aluminium company, using his civil engineering skills to attempt to sell aluminium as a viable structural material for buildings.

In 1952 he founded the sports car company Lotus Cars. Chapman initially ran Lotus in his spare time, assisted by a group of enthusiasts. His knowledge of the latest aeronautical engineering techniques would prove vital towards achieving the major automotive technical advances he is remembered for. He was famous for saying “Adding power makes you faster on the straights. Subtracting weight makes you faster everywhere”, as his design philosophy focused on cars with light weight and fine handling instead of bulking up on horsepower and spring rates.

Under his direction, Team Lotus won seven Formula One Constructors’ titles, six Drivers’ Championships, and the Indianapolis 500 in the United States, between 1962 and 1978. The production side of Lotus Cars has built tens of thousands of relatively affordable, cutting edge sports cars. Lotus is one of but a handful of English performance car builders still in business after the industrial decline of the 1970s.