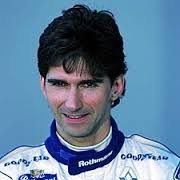 Damon Graham Devereux Hill OBE (born 17 September 1960) is a retired British racing driver from England. He is the son of Graham Hill, and is the only son of a world champion to win the title. He started racing on motorbikes in 1981, and after minor success moved on to single-seater racing cars. But although he progressed steadily up the ranks to the International Formula 3000 championship by 1989, and was often competitive, he never won a race.

Hill became a test driver for the Formula One title-winning Williams team in 1992. He was promoted to the Williams race team the following year after Riccardo Patrese’s departure and took the first of his 22 victories at the 1993 Hungarian Grand Prix. During the mid-1990s, Hill was Michael Schumacher’s main rival for the Formula One Drivers’ Championship. The two clashed on and off the track. Their collision at the 1994 Australian Grand Prix gave Schumacher his first title by a single point. Hill became champion in 1996 but was dropped by Williams for the following season. He went on to drive for the less competitive Arrows and Jordan teams, and in 1998 gave Jordan its first win.

Hill retired from racing after the 1999 season. He has since launched several businesses and has made appearances playing the guitar with celebrity bands. In 2006, he became president of the British Racing Drivers’ Club, succeeding Jackie Stewart. Hill stepped down from the position in 2011 and was succeeded by Derek Warwick. He presided over the securing of a 17-year contract for Silverstone to hold Formula One races, which enabled the circuit to see extensive renovation work.