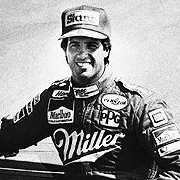 Sullivan was given a 21st birthday present of a course at the Jim Russell Racing Drivers School at the Snetterton circuit in England. He competed in Formula Ford, Formula Three Formula Two and before returning to race in the United States. In 1982, he made his début in the PPG Indycar series, and was recruited by the Tyrrell Formula One team for the 1983 season at the request of primary sponsor Benetton, who wanted an American driver. Sullivan competed in the fifteen races of the 1983 season, scoring two points with a fifth place at the Monaco Grand Prix and finishing seventeenth in the World Drivers’ Championship. He also performed strongly in the non-championship Race of Champions held at the Brands Hatch circuit in April, finishing second behind reigning champion Keke Rosberg.