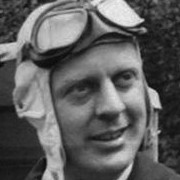 Eric Thompson (born 4 November 1919) is a British book dealer and former insurance broker and motor racing driver. He participated in sports car racing between 1949 and 1955 taking his greatest success by finishing third in the 1951 24 Hours of Le Mans and took part in the 1952 British Grand Prix.

Thompson worked as a broker for Lloyd’s of London. His racing career started in 1948 racing cars for HRG. He won the 1.5 litre class in the 24 Hours of Le Mans in 1949 and drove for Aston Martin driving a DB2 to third place in the 1951 24 Hours of Le Mans. He also drove in Formula Libre, Tourist Trophy and Formula Two achieving minor success. He took part in his only Formula One race in the 1952 British Grand Prix finishing fifth and later spent more time working at Lloyd’s. He retired at the end from motor racing at the end of 1955. Thompson resigned from Lloyd’s in the 1980s and since became a dealer of rare books on motorsport.

After the war ended Thompson decided to pursue his passion of motor racing. He began his racing career in 1948 at the age of 28 and was well funded. Thompsons continued to work at Lloyd’s of London and was entitled to two weeks of holiday, with every third weekend off, when he raced. His first race was the Paris 12 Hours held in Montlhery in a shared drive with Robin Richard driving an HRG and finished 4th in the 1.5 litre class and 17th overall.

In 1949 Thompson made his debut in the 24 Hours of Le Mans with HRG sharing his drive with Jack Fairman. The pairing won the 1.5 litre class and finished 8th overall. They later entered the 24 Hours of Spa where he clinched victory in their class. Thompson also won two handicap races at Goodwood. Thompson later took a class win in the Silverstone International Trophy and finished 6th in his class in the Prescott Hillclimb. In 1950 he joined Aston Martin alongside Dennis Poore and Pat Griffiths and gave support to three drivers: Reg Parnell, Peter Collins and Roy Salvadori.

Thompson’s first race for Aston Martin was an one hour race held at Silverstone where he finished 4th in his class and 14th overall. He also took part in the 24 Hours of Le Mans sharing an Aston Martin DB2 with John Gordon and was forced out after nine laps due to engine failure. Thompson also took part with HRG and secured a class win and finished 2nd overall at Blandford, 3rd in a Goodwood Handicap and clinched a class win at the Cambridge University Sprint at Bedwell Hey. In the same year Thompson made his dèbut in Formula Three driving a Cooper Vincent at Castle Combe where he retired.

In 1951 Thompson competed prominently in open-wheel racing. He competed in the Goodwood Lavant Cup in a Cooper finishing 5th and finished in the same position in a Bugatti T51 in a Boreham Libre event. Thompson later competed in a ERA/Delage and Delahaye and other Libre races and took part in sports car events with an Aston Martin DB2 in the Tourist Trophy where he finished 3rd in his class and 8th overall.[1] For the works team, Thompson shared a DB2 with Lance Macklin in the 24 Hours of Le Mans where the pair clinched victory in the 3 litre class and finished 3rd overall.

In 1952 Thompson took part in his third 24 Hours of Le Mans driving an Aston Martin DB3 alongside Parnell and retired from transmission problems. The pair suffered a further retirement from the Goodwood Nine Hours. During the race the car being driven by Thompson entered the pitlane with smoke coming out of the car with Parnell unprepared to take over the seat. Parnell grabbed Thompson by the arm and dragged him out before the car caught fire. Throughout the year he drove a DB2 entered by Walker, clinching two victories in handicap events at Goodwood and one at Snetterton with an 7th and 8th at the same circuit. He later took 3rd in class at the CUAC Bottisham Sprint. Thompson took 2nd, 7th and 10th in the races at Snetterton, 3rd in Boreham and Castle Combe driving an ERA/Delage and clinched 5th in a private ERA at the British Grand Prix Libre event.