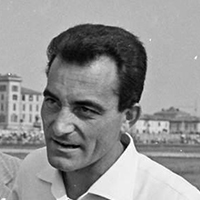 Scarlatti’s best season in Formula One was as a works Maserati driver in 1957, when he finished sixth in the Pescara Grand Prix, narrowly missing out on the points-scoring positions when he was overtaken in the latter stages by Stuart Lewis-Evans. He later scored his only championship point when Harry Schell took over the Italian’s Maserati 250F during the Italian Grand Prix and finished fifth.