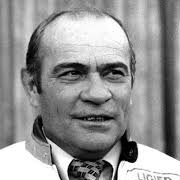 He first made his name as a rugby player in the late 1940s when he was working as a butcher’s assistant in his home town of Vichy. An orphan, he was determined to build up a successful business and saved all his money in order to buy a bulldozer and then went into the construction business. When his rugby career ended – after he had played for the French national team – he began racing motorcycles before trying his hand at single-seater racing with a Formula Junior Elva.

Racing
With motorway construction booming in France, Ligier was able to build a large construction empire and during the period made important friends in local politicians François Mitterrand and Pierre Bérégovoy.

In the late 1960s Guy started racing Porsche sportscars and even raced in F1 with privately entered Cooper-Maserati and Brabham-Repco machinery. Neither was very successful and so in 1968 Ligier decided to form a partnership with Jo Schlesser and the two bought a pair of McLaren Formula 2 cars. Schlesser was killed that year on his F1 debut at the French Grand Prix, at the wheel of the curious air-cooled Honda F1 car, and Ligier decided he had had enough and retired. He decided that he would build racing cars instead and hired Michel Tétu to design the Ligier JS1, a production sportscar (the initials JS were a tribute to Jo Schlesser). The company was built up in sportscar racing but at the end of 1974 Ligier bought the assets of Matra Sports and embarked on a Formula 1 team. This began racing in 1976 with Jacques Laffite driving. The team became highly successful in the early 1980s with Laffite, Patrick Depailler and Didier Pironi driving. In 1981 Ligier’s old friend François Mitterrand became President of France and when Ligier ran into trouble in 1983 the President ordered that government-owned companies such as Elf, Gitanes and Loto should supply sponsorship.

Ligier also had preferential treatment when it came to engines, political pressure being applied to Renault to force the company to supply the team, which used Renault engines from 1984 to 1986 and from 1992 to 1994.

The Ligier-Mitterrand-Bérégovoy alliance reached its peak in the early 1990s with the reconstruction of the Magny-Cours racing circuit as a new headquarters for Ligier and as a racing circuit to host the French Grand Prix. President Mitterrand and Prime Minister Bérégovoy backed the idea.

In 1992 Ligier realized that the socialist government would not last forever and sold his team to Cyril de Rouvre. He used the money he gained to corner the market in natural fertilizer in central France and set about building another fortune. Within a few months Mitterrand’s Socialist Party was annihilated in the elections and Bérégovoy committed suicide on May 1, 1993.