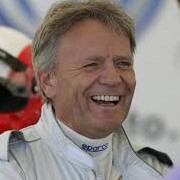 Marc Surer (born 18 September 1951 in Arisdorf) is a former racing driver from Switzerland. He participated in 88 Formula One World Championship Grands Prix, debuting on 9 September 1979. He scored a total of 17 championship points.

Surer enjoyed BMW backing for most of his career, placing second in the 1978 F2 championship and winning the 1979 series in a works March-BMW. Marc’s early F1 years were somewhat troubled; he broke his legs testing an ATS at Kyalami in 1980, and again racing there in 1981 for Ensign. Surer re-established himself at Arrows, but his BMW connections saw him placed at Brabham for 1985, later moving back to Arrows when they acquired BMW power.