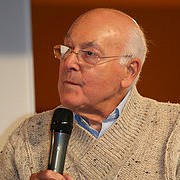 Graeme Murray Walker, OBE (born 10 October 1923), known as Murray Walker, is a semi-retired Formula One motorsport commentator and journalist. For most of his career he worked for the BBC, but when it lost the contract for Formula One coverage to ITV, Walker continued his commentating after the change of broadcaster.

He is known for his distinctive, enthusiastic commentary style and gentlemanly and considerate conduct, seeing the best in drivers who had attracted controversy. He rarely criticised drivers and preferred to give the benefit of the doubt in attributing blame for incidents.