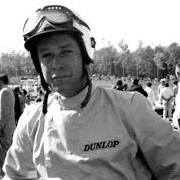 Olivier Gendebien (12 January 1924 – 2 October 1998) was a Belgian racing driver who was called “one of the greatest sportscar racers of all time”.

Gendebien’s success in rally competitions brought him to the attention of Enzo Ferrari, who offered him a contract to drive a Ferrari in sports car events and selected Grands Prix. Much respected as a true gentleman by everyone who knew him, he remained a member of the Ferrari team until he retired from racing. Enzo Ferrari summed him up as “a gentleman who never forgets that noblesse oblige and, when he is at the wheel, he translates this code of behaviour into an elegant and discerning forcefulness.”

During his career he competed in only 15 Formula One races as most of the time he was Ferrari’s spare driver, filling in only occasionally. He nonetheless scored points in five races, and was only one place away from a points-scoring finish on a further two occasions.

He made his début at the 1956 Argentine Grand Prix, with the Ferrari team, but it was during a stint driving for the British Racing Partnership’s Yeoman Credit Racing team in 1960 that Gendebien scored his best finishes; he took second in the 1960 French Grand Prix and third in front of a home crowd at the 1960 Belgian Grand Prix.

The second of these was a somewhat bitter-sweet success, as Gendebien’s team-mate at the time, Chris Bristow, was killed in an accident during the race. Gendebien himself walked away with slight injuries in October 1961 after his Lotus-Climax failed to negotiate a turn during practice for the 1961 United States Grand Prix at Watkins Glen, New York. The car flipped over and Gendebien’s shoes were torn off by the impact.