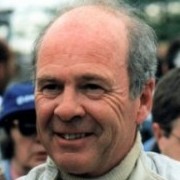 Gethin also raced for Team McLaren in the 1970 Canadian-American Challenge Cup series, driving the McLaren M8D that had been driven by Dan Gurney in the first three races of the season. Gethin won one race and finished third in the 1970 championship. In 1974 Gethin won the Tasman Series, a Formula 5000 series held in Australia and New Zealand. Gethin drove a Chevron B24 Chevrolet. Gethin later ran a Formula 3000 team.