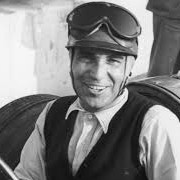 Taruffi began his motorsport career racing motorcycles. He won the 1932 500cc European Championship on a Norton and in 1937 set the motorcycle land speed record at 279.503 km/h (173.68 mph). He won the 1957 Mille Miglia, the last competitive edition of the famous Italian race. Following this tragic race he pledged to his wife, Isabella, that he would never race again. He was 50 years of age.[1] 14 people were killed in the thousand mile auto race of 12 May. Alfonso de Portago crashed into a crowd of spectators at Guidizzolo near Mantua. Portago died along with co-driver, Edmund Nelson, an amateur driver, and 11 race fans.

Taruffi drove a newly introduced 2-litre, 4-cylinder Ferrari, which placed third in the 360 kilometre race Grand Prix de Bari at Bari, Italy, in September 1951. He finished behind Juan Manuel Fangio and Froilán González with a time of 2 hours 58 minutes 40 3/5 seconds. Taruffi and Alberto Ascari participated in the Carrera Panamericana in the mountains of Mexico in November 1951. They placed first and third respectively over the course from Mexico City to León, Guanajuato, a 267-mile (430 km) leg. Taruffi led second-placed Troy Ruttman by more than four minutes. Taruffi trimmed 15 minutes on the Mexico City-Leon leg and another 21 minutes between Leon and Durango. In the process he climbed from 12th to third overall. Taruffi won the race on 25 November, with a time of 21:57:52, over mountains and plains of the southeastern tip of Mexico. He had an average speed of 87.6 mph (140.97 km/h).

Taruffi and Harry Schell placed fifth overall in the 1955 Florida Grand Prix, driving a Ferrari. Taruffi claimed first place in a Ferrari, at the 1955 Tour of Sicily, with an overall time of 10 hours 11 minutes 19.4 seconds, with an average speed of 105.998 kilometers per hour (65.867 mph). Taruffi dropped out of the 1955 Mille Miglia, when he encountered a broken oil pump on the course north of Rome. He and eventual winner, Stirling Moss, were vying for the lead in the early stages of the race. Cesare Perdisa won by 22 seconds in the 1955 Grand Prix of Imola, driving a two-litre Maserati. Taruffi spun his car into a straw bale at the edge of the track on the first lap. He was uninjured, though his car was damaged, and he was forced to retire from the race. Jean Behra and Taruffi teamed to secure a fifth place finish in a Maserati at the 1956 12 Hours of Sebring.[15] Taruffi established a world record for Class E cars in June 1956. He raced 100 miles (160 km) in 46 minutes 27.2 seconds, an average of 129.9 miles per hour (209.04 km/h).[16] Also at Monza, Taruffi broke the one hour mark of 212.543 kilometres per hour (132.074 mph). A third record he performed was for 200 kilometres. His time was 53 minutes 14.5 seconds. In the 17th running of the Tour of Sicily, in 1957, Taruffi had a small crash while in pursuit of leader Olivier Gendebien. He touched the wall in Gioiosa Marea but continued in his Maserati. Gendebien won in a Ferrari. The event was marred by the death of J. Olivari who was burned to death when his Maserati hit the a wall in one of the course’s 11,000 curves.