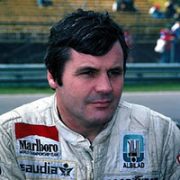 Alan Stanley Jones MBE (born 2 November 1946 in Melbourne, Victoria) is an Australian former Formula One driver. He was the first driver to win a Formula One World Championship with the Williams team, becoming the 1980 World Drivers’ Champion and the second Australian to do so following triple World Champion Sir Jack Brabham. He competed in a total of 117 Grands Prix, winning 12 and achieving 24 podium finishes. In 1978 Jones won the Can-Am championship driving a Lola.

Jones is also the last Australian driver to win the Australian Grand Prix, winning the 1980 event at Calder Park Raceway, having lapped the field consisting mostly of Formula 5000 cars while he was driving his Formula One Championship winning Williams FW07B.