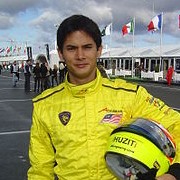 Yoong began his career in saloon cars before moving into the Proton one-make series. He later raced in single-seater cars where he won the Malaysian Championship in 1995. He moved into Formula Renault in 1996 with help from sponsors but finished outside the top-10. Yoong consulted his father who believed his son would succeed in lower categories. Yoong decided to drive in Formula Three but dropped out in 1999 after withdrawal from his sponsors. He subsequently went into Formula 3000 and managed to improve despite a horrific crash at Spa-Franchomps during the season. Yoong also raced in Formula Nippon where he achieved no success.

Yoong became the first Malaysian to race in Formula One with Minardi at the 2001 Italian Grand Prix and left the sport in 2002. Yoong had a less successful career in CART World Series but had improved in the Porsche Carrera Cup with a less successful foray into V8 Supercars. Yoong raced in A1 Grand Prix series between 2005 and 2008 and scored three victories. In between this, Yoong raced in the Le Mans 24 Hours. Yoong worked for Lotus Racing as head of driver development and is also a commentator for ESPN Star Sports. Yoong married Arriana Teoh, who was Miss World 1997 Malaysia in 2002 and has a son, Alister, born in 2003.