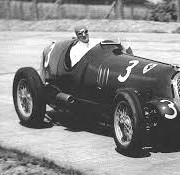 After the Second World War, he was Motorsport functionary, he became a member of the Italian Automobile Club and the Federation Internationale de l’Automobile (FIA), where he participated in the launch of the Formula 1 World Championship.