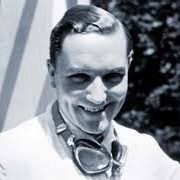 Manfred Georg Rudolf von Brauchitsch (15 August 1905 – 5 February 2003) was a German auto racing driver who drove for Mercedes-Benz in the famous “Silver Arrows” of Grand Prix motor racing in the 1930s.

Although an excellent driver who had reasonable success, he struggled with bad luck, and was overshadowed by his more successful Mercedes-Benz teammates Rudolf Caracciola and Hermann Lang.

He was noted for his red helmet and his bad luck, losing a number of other Grands Prix when he was on the very verge of winning (no less than five, by some counts). His most famous loss was the 1935 German Grand Prix, when a tire blew while he was leading the last lap, handing victory to Tazio Nuvolari in an Alfa Romeo in one of the latter’s most famous victories – the only time during the reign of the Silver Arrows when a Grand Prix was won by a car other than a Mercedes or Auto Union.