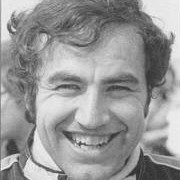 Brian Henton (born 19 September 1946 in Castle Donington, Leicestershire) is a former racing driver from England. He won both 1974 British Formula Three Championships, and the Formula Two championship in 1980. He participated in 38 Formula One grands prix, debuting on 19 July 1975, but never scored any championship points.

Henton (nicknamed Superhen in the British racing press) came from a modest council house background and did not start racing until he was 23. On winning the minor British Formula Vee championship in 1971, ever-conscious of the value of public relations, he announced that he was going to be World Champion. This aim eluded him, but he enjoyed a successful career in Formula Three and Formula Two.

Henton’s F1 debut came in 1975 for Lotus, theoretically a good drive but the team was in turmoil with the Lotus 72 finally uncompetitive and its replacement the Lotus 76 a failure, so nothing concrete was achieved. Between 1975 and 1978 he mixed Formula One and Formula Two drives (including a spell in a private March for his own British F1 Racing team), never quite establishing himself in either category, but clinched the 1980 F2 championship for Toleman, who took him into F1 for 1981. The first Toleman-Hart was something of a disaster, overweight and underdeveloped, and Henton only managed to qualify once. Unfruitful outings for Arrows and Tyrrell in 1982 led to no more success.

Perhaps fittingly, his last Formula One outing was at the Race of Champions at Brands Hatch in April 1983, which also turned out to be the last non-championship F1 race in the modern era.