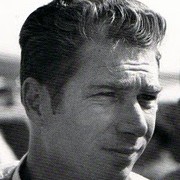 Jim Hall (born July 23, 1935 in Abilene, Texas) is a former racecar driver and constructor from the United States. He competed in Formula One from 1960 to 1963, participating in 12 World Championship Grands Prix and numerous non-Championship races.

Hall’s special place in motorsports history came as the result of him being the “motivating force” and part owner, with Hap Sharp, of Chaparral Cars. Based in Hall’s hometown of Midland, Texas, during the 1960s, in the United States Road Racing Championship, and later in the CanAm, Chaparral cars were the most innovative cars in racing. Hall was a very early adopter of aerodynamics applied to race cars and was the leading proponent of that technology for an entire decade. He had a sabbatical in the early 1970s, racing in several SCCA Trans-Am Series races. Hall’s Chaparral Cars team came back to prominence in the Championship Auto Racing Teams (CART) series, including two wins in the Indianapolis 500 in 1978 and 1980; the latter with the first of the ground effect cars to be raced in the event. He would later turn to using off-the-shelf racecars to race in his Indycar team which was renamed Jim Hall Racing until 1996, when he retired from racing altogether. He now resides in Midland Texas, remaining active in the oil and gas business, and motorsports racing legacies.