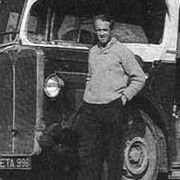 Bruce Halford (18 May 1931 – 2 December 2001) was a British racing driver from England. He was born in Hampton-in-Arden (then in Warwickshire) and educated at Blundell’s School

Halford drove in Formula One from 1956 to 1960, participating in nine World Championship Grands Prix and numerous non-Championship races.

He died in Churston Ferrers, Devon. Halford’s obituary in The Daily Telegraph described him as “one of the last of the 1950s’ select band of private-entrant owner-drivers from the heyday of the classical front-engined Grand Prix car.”