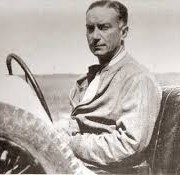 He raced once for Bugatti in 1920 and in his only other race won the 1931 Belgian Grand Prix with William Grover-Williams.