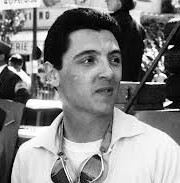 Significantly younger than the majority of the drivers around at the time, Perdisa often gave his car to his more experienced team-mates when they encountered troubles. This happened, for example, on the 11th lap of the 1956 Belgian Grand Prix, Stirling Moss lost the right rear wheel of his Maserati. Moss brought his car to a stop and ran a quarter of a mile back to the pits where he took over Perdisa’s Maserati, which he drove to the finish.