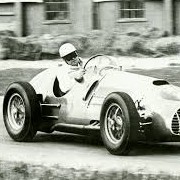 Before World War II Parnell was a very successful racing driver, winning at many levels with various cars, including a Bugatti. After the war he continued with his success, winning with a Maserati and an ERA, before participating in the very first Formula One World Championship Grand Prix, at Silverstone, in 1950, where he finished third as a guest driver in a works Alfa Romeo 158 1.5 litre supercharged 8. He raced a wide selection of different cars, and his other World Championship Grands Prix included two races for BRM: one in the Ferrari “Thinwall Special” owned by Tony Vandervell, who was later to run the Vanwall team; one in a Cooper-Bristol; and a couple for the Scuderia Ambrosiana team, the first in a Maserati and the other in a Ferrari. He won non-championship Formula One races until his retirement in 1957.