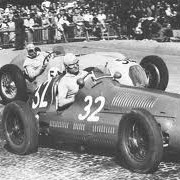 Charles Pozzi (August 27, 1909 – February 28, 2001) was a French racing driver who participated in one World Championship Formula One race in 1950, the year of its inception.

Born Carlo Alberto Pozzi in Paris, France of Italian parentage, he became known as Charles, the French translation of his name. He was working as an automobile broker and his career as a racing driver only began when he was already 37 years old. Later in life, as the official French importer of Ferrari and Maserati automobiles, his name was to appear on many racing cars.