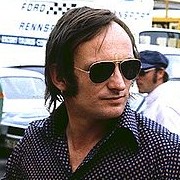 Christopher Arthur Amon MBE (born 20 July 1943) is a former motor racing driver from New Zealand. He was active in Formula One – racing in the 1960s and 1970s – and is widely regarded to be one of the best F1 drivers never to win a championship Grand Prix. His reputation for bad luck was such that fellow driver Mario Andretti once joked that “if he became an undertaker, people would stop dying”. Former Ferrari’s Technical Director Mauro Forghieri stated that Amon was “by far the best test driver I have ever worked with. He had all the qualities to be a World Champion but bad luck just wouldn’t let him be”.[1]

Apart from driving, Chris Amon also ran his own Formula One team for a short period in 1974. Away from Formula One, Amon had some success in sports car racing, winning the 24 Hours of Le Mans race in 1966.