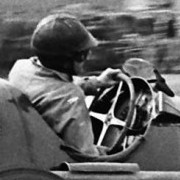 Roger Dennistoun “Dennis” Poore (19 August 1916, Paddington, London – 12 February 1987, Kensington ) was a British entrepreneur, financier and sometime racing driver. Poore used his personal wealth to bankroll the founding, in 1950, of the motor racing journal Autosport. He himself was a keen motor sport participant, and competed in two World Championship Grands Prix in 1952. He made his debut in the British Grand Prix on 19 July 1952, where he finished fourth. He scored 3 championship points.