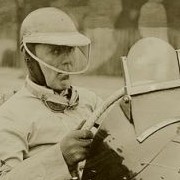 Francis Richard Henry Penn Curzon, 5th Earl Howe, CBE, PC, VD (1 May 1884, Mayfair, London – 26 July 1964, Amersham, Buckinghamshire) was a British naval officer, Member of Parliament, and motor racing driver and promotor. In the 1918 UK General Election he won the Battersea South seat as the candidate of the Conservative Party, which he held until 1929. While in Parliament he took up motor racing, and later won the 1931 24 Hours of Le Mans race. He ascended to the Peerage in 1929, succeeding his father as the 5th Earl Howe. Earl Howe co-founded the British Racing Drivers’ Club with Dudley Benjafield in 1928, and served as its President until his death in 1964.

Francis Curzon made his race debut at the comparatively old age of 44, in the 1928 Irish TT with a Bugatti Type 43. After leaving the House of Commons he pursued his driving career with increasing vigour. During the 1930s he became a well known driver, competing in many national and international races, most notably the 24 Hours of Le Mans. He entered the endurance classic six times between 1929 and 1935, only missing the 1933 event. For the first year he was entered as a part of the Bentley factory team, but latterly he entered his own cars. It was in his own Alfa Romeo 8C that he won the race in 1931, driving in partnership with Henry Birkin.

Away from La Sarthe, Earl Howe (as he was most commonly entered following his father’s death) drove in a variety of automobiles. Indeed, in the mid-1930s he was credited by Time magazine as having “Europe’s most elaborate” collection of racing cars. Although patriotic, he was often forced to buy and run cars built outside the UK, as once Bentley had withdrawn from motor sport there were no realistically competitive British-built machines available. He favored the Bugatti marque, owning and campaigning several Bugattis. He won the Donington Park Trophy race in 1933, and added to his victory haul with a win in the 1938 Grosvenor Grand Prix, at Cape Town in South Africa. In addition to these two victories he also took podium finishes in eleven other major races between 1933 and 1939, and became one of only two men to have competed in every running of the RAC Tourist Trophy at Ards, the other being E.R. Hall.

In 1937, Howe was seriously injured in an accident driving his pale blue and silver — Howe’s personal racing colours — English Racing Automobiles R8B, while challenging the Thai Royal family competitor Prince Bira for the lead in the Campbell Trophy at the Brooklands circuit.

Aside from assuming the Presidency of the BRDC, Earl Howe also served as Vice-President of the FIA’s Commission Sportive Internationale, the governing body of international motorsport at the time. He also kept motorsport issues on the political landscape, with numerous speeches in the House of Lords.