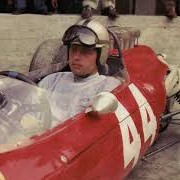 Giancarlo Baghetti (25 December 1934 in Milan, Italy – 27 November 1995 also in Milan) was a Formula One driver who raced for the Ferrari, ATS (the Italian team), BRM, Brabham and Lotus teams. He was the son of a wealthy Milan industrialist.

Baghetti began racing in 1955 in production cars, moving up to Formula Junior in 1958. In 1961 he was selected by the Federazione Italiana Scuderie Automobilistiche (FISA), a coalition of independent Italian team owners who had agreed a loan deal with Ferrari for a 156 Dino[dubious – discuss] Formula Two car to run in non-Championship Grand Prix, giving experience to promising Italian drivers. Despite not showing spectacular form in lower categories, Baghetti was chosen over Albino Buttichi and Lucien de Sanctis for the seat. The car was first entered for the Syracuse Grand Prix, the first major event run under the new 1.5-litre championship regulations, and against a strong field Baghetti qualified second and won in the only Ferrari, with the British teams and Porsche 718 flat 4 unable to compete with the Dino’s V6. He then drove the same car to win at the Napoli Grand Prix a few weeks later.

Team FISA then acquired a new[dubious – discuss] Ferrari 156 for the 1961 French Grand Prix at Reims-Gueux, entering Baghetti for this World Championship event. Once Wolfgang von Trips, Richie Ginther and Phil Hill had all retired their works 156s, Baghetti was left to uphold Ferrari honour. He overcame Dan Gurney’s Porsche 718 to take victory, giving him a hat trick of wins from his first three Grand Prix. Gurney was leading with 100 yd (91 m) to go as the cars raced to the finish line at 160 mph (260 km/h). The victory meant Baghetti became the first Italian since 1954 to win a Formula One World Championship event. It also ensured that he became the first, and only driver ever to win on their World Championship Grand Prix debut against a field that did not consist entirely of other debutant drivers.

He entered two more Championship races, retiring from the 1961 British Grand Prix and 1961 Italian Grand Prix, though he posted fastest lap in the latter. He also won the poorly attended Prima Coppa Italia race at Vallelunga in a Porsche 718.

He was promoted to the works Ferrari line-up for 1962, but took just two Championship placings – fourth at the Dutch Grand Prix, and fifth at the Italian Grand Prix, as Ferrari was outclassed by the British teams. Baghetti took second in the non-Championship Mediterranean Grand Prix. He was involved in the disastrous ATS effort in 1963, joining up with Phil Hill for Carlo Chiti’s breakaway team, but failed to register a finish from five starts. For 1964 he switched to Scuderia Centro Sud’s outdated BRM P57 cars, peaking with seventh at the Austrian Grand Prix. His Grand Prix career was then virtually over, though he had three more one-off drives, all at the Italian Grand Prix – a works Brabham in 1965, a Reg Parnell-entered Ferrari in 1966, and a works Lotus in 1967, when he would have scored a point but for a blown engine.