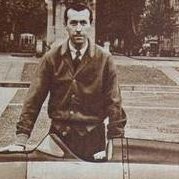 He studied engineering at the Politecnico di Milano and raced cars such as Salmson, Derby, Alfa Romeo and Maserati, participating eleven times in the Mille Miglia. Lurani took class wins in the event three times: 1933 in an MG K3, 1948 in a Healey and 1952 in a Porsche.

After partaking in the second Italo-Abyssinian War from 1935 to 1936, Lurani founded the racing team Scuderia Ambrosiana in 1937 along with Luigi Villoresi and Franco Cortese (1937). Sustaining a bad hip injury in a Maserati 4CM at Crystal Palace, Lurani ended his single-seater career in 1938 but continued racing sportscars until 1953.

After World War II Lurani became more involved in administration and politics, working with the FIA, where he initiated GT in 1949 and Formula Junior in 1959.

He also designed record breaking cars based on Moto Guzzi engines. In 1935 the Nibbio 1 was the first 500cc car to exceed 100mph. The 350cc Moto Guzzi powered Nibbio 2 broke long distance records at Monza in 1956. He was president of the FIM (Fédération Internationale de Motocyclisme) Sporting Commission for several years.