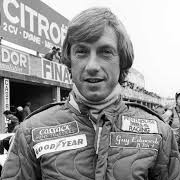 Guy Richard Goronwy Edwards, QGM (born 30 December 1942) is a former racing driver from England. Best known for his sportscar and British Formula One career, as well as for brokering sponsorship deals, Edwards participated in 17 World Championship Formula One Grands Prix, debuting on 13 January 1974. He scored no championship points.

Edwards competed in the Aurora Formula One Championship in the UK from 1978 to 1980, scoring several wins driving March, Fittipaldi and Arrows chassis. In 1979 he scored the only race win for a Fittipaldi Formula One chassis.

Guy Edwards’s Hesketh 308D of 1976, in the Penthouse Rizla Racing livery which Edwards brought to the team.
He is also renowned for being one of the drivers, along with Arturo Merzario, Brett Lunger and Harald Ertl who saved Niki Lauda from his burning car during the 1976 German Grand Prix, for which he was later awarded a Queen’s Gallantry Medal for his bravery. Currently, he works helping racing drivers to get sponsorship.